The remarkable career of a senior Qantas aeronautical engineer who, in retirement, has looked down from the skies to the sea beneath

On the afternoon of Wednesday 22 July 2020, William (Bill) Bourke and his wife Elizabeth stood and watched, as did many other Sydneysiders, as Qantas Flight QF7474 flew over the City before setting course for Los Angeles and the aircraft graveyard in the Mojave Desert of the USA.

The Qantas jet, VH-OEJ, a General Electric-engined Boeing 747-400 was making the last Qantas 747 ‘jumbo’ flight, marking the retirement of an aircraft much loved by pilots and passengers over nearly 49 years flying with the airline. The 747 was the aircraft that introduced mass air travel to the world at affordable fares.

Bill, Sydney Heritage Fleet’s Maritime Records and Research Centre Curator, had special reasons for deep feelings as he watched Flight QF7474 make two low altitude flights through Sydney Heads in a farewell to Sydney and Australia. Bill’s eldest son, Liam, also watched the sad event from North Head with a number of his pilot friends; Liam had flown Qantas’ third-last 747 to the Mojave Desert just a few weeks before.

Bill Bourke joined Qantas in May 1969 as a junior engineer in its Technical Development Department, a small group of professional aeronautical engineers. When Qantas was the first airline to order the longer range Boeing 747-200B, the group’s task was to manage its introduction, including contract arrangements, specification of interiors and aircraft systems. They then managed the delivery in 1971 of the first 747-200B aircraft, with the assistance of Qantas’ Technical Representative at the Boeing plant at Everett, north of Seattle. Thus began nearly 49 years of Boeing 747 service with Qantas.

An article published in a Qantas 70th anniversary commemorative edition of The Australian, 19 November 1990. Bill’s prediction in the article about future supersonic travel, sadly, was not to be, particularly after the tragic Air France Concorde crash in July 2000.

In Bill’s early years with the Department, he was more involved with future projects like Concorde. Qantas had options for six aircraft, but as we know that never happened, due to the aircraft’s marginal economics and payload/range capability and sonic-boom restrictions imposed by the aviation regulators on Qantas’ key route, the Kangaroo Route, from Australia to the UK. It was an exciting aircraft for Bill to be involved with; but that’s another story! [Editor: I had a ticket on the return leg of the first British Airways Concorde commercial flight from Sydney to London. The flight was cancelled at the last moment due to arguments over sonic boom and airport noise and I flew to London on a 747 – even a First Class seat did not make up for the disappointment!]

Some years later Bill was involved with Qantas’ major decision to change the QF 747 type to be powered by Rolls Royce engines rather than Pratt & Whitney engines, the US engine manufacturer of choice for its Boeing 707 aircraft fleets.

The first Qantas Boeing 747SP, VH-EAA, during production. Bill and the Qantas production inspector are on the wing.

Bill took up the position of Qantas Technical Representative at Boeing in the US in March 1980, a post he held until December 1982. He took delivery of two QF 747SP aircraft, he and his family returning for some home leave on the first 747SP’s delivery flight to Australia. Also during that time he took delivery of three 747-200B aircraft and managed the return of one of the 747SP aircraft to Seattle for certification of its 5th engine carriage capability. Bill’s time in the US Pacific Northwest was a highlight of both his Qantas career and his family’s life.

The Qantas acceptance team and Boeing staff at a 767-338 delivery on the flight line at the Boeing Everett plant, north of Seattle, USA. Bill flew back to Australia on the aircraft’s delivery flight, with one stop in Nadi, Fiji.

Bill was present in Seattle in August 1989 to finalise with the then Civil Aviation Authority Australia, the first Qantas Boeing 747-400 (VH-OJA) aircraft’s First of Type Certification of Airworthiness and eligibility for entry on the Australian Register. This occurred prior to Qantas’ acceptance of the aircraft, its positioning flight to London and then its record non-stop flight to Sydney.

Seattle, August 1989; Bill and the first Qantas Boeing 747-400 (VH-OJA) aircraft on the flight line at Everett during acceptance procedures.

Bill has much to be proud of in the key roles he played in introducing new aircraft to Qantas, but those who know his quiet modesty will understand when he says:

“I feel so honoured, privileged and professionally satisfied, to have dealt with so many past Boeing Vice Presidents, the original designer of the 747, Joe Sutter, the numerous design engineers, the various sales and contract staff at Boeing and the engine manufacturers at Pratt & Whitney, General Electric and Rolls Royce.” And Bill is not name dropping when he says:

“I also had a lot to do with Boeing’s counterparts at Airbus Industrie, British Aircraft Corporation and Aerospatiale (the Concorde manufacturer) and other manufacturers like McDonnell Douglas and their DC10 and MD 11 aircraft. Lockheed, too, and their L1011 aircraft, Britten Norman on the Isle of Wight and their three engine Trislander aircraft that I introduced to Fiji Airways; and the Japanese manufacturer Namco of the twin turboprop aircraft the YS 11 which I evaluated for Air Nuigini, but was not introduced to the airline. There are many stories I can tell about that exercise!!

“I also had the benefit of working with so many Qantas professional and maintenance engineers dealing with engines, interiors, structures, electrical/electronic and aircraft systems and aircraft performance as well as the professional pilots of our Flight Operations Division, many of them with WWII experience!”

An acknowledgement of Bill Bourke’s contribution to aviation environment issues from the Senior Director, Aviation and Environment, at the International Air Transport Association (IATA). Bill was involved with IATA from 1970 to 2002.

There was another side to Bill’s Qantas career.  A large part was to do with aircraft environmental issues; aircraft/airport community noise and aircraft engine emissions. From 1987, after his boss and mentor retired, Bill assumed the role of Qantas’ authority on these issues. He represented Qantas and the airline industry on airport consultative committees nationally and overseas. For many years he was chairman of IATA’s various environmental committees and attended numerous IATA and ICAO forums and meetings on these matters.

Not long before the Qantas 747 era came to an end, Bill and his wife Liz visited the Historical Aircraft Restoration Society’s (HARS) museum just south of Wollongong where the first 747-400 aircraft, VH-OJA, which Bill introduced to Qantas, is on display. Bill donated to the museum an extensive album of photographs taken during the aircraft’s production.

Liz and Bill Bourke under the wing of Qantas 747-400, VH-OJA, on a 2020 visit to the Historical Aircraft Restoration Society’s (HARS) museum just south of Wollongong, where the aircraft is now on display.

Bill Bourke, in his retirement, is volunteer Curator of Sydney Heritage Fleet’s Maritime Records and Research Centre. How does an aircraft engineer, after a career such as Bill’s find himself as Curator in a maritime museum?

The answer lay close to home. Bill became interested in, then fascinated by the sea-going career of his father in law, Captain Ronald Charles Pratt, and his family.

Captain Pratt joined the Australasian United Steam Navigation Company (A.U.S.N) in 1927 as a cadet aged 15 years. After a brief period away from A.U.S.N he served with them again from 1933 to 1946, including time as a Merchant Navy mariner during WWII. He joined the Queensland Coast and Torres Strait Pilot Service in July 1948 and remained with them until he retired from the sea in 1976. At the time of his retirement, Captain Pratt was Senior Pilot of the Service and the first Grand Pilot (to pilot 1,000 ships).

Researching the life of Captain Pratt and his family, introduced Bill to the world of maritime museums, so much so, that he became a volunteer in the library at Sydney Maritime Museum, home of Sydney Heritage Fleet in 2003, not long after retiring from Qantas. On the retirement of the Fleet’s long-serving Honorary Librarian, Joseph (Lew) Lewis-Hughes in 2005, Bill became Curator and established the Maritime Records and Research Centre, at the core of Sydney Heritage Fleet’s significant Collection of historic ships, artefacts, and research information.

A three-part series, written by Bill on the career of Captain Pratt, was published in the Sydney Maritime Museum’s magazine Australian Sea Heritage .

The first of a three-part series of articles about the life and career of Bill Bourke’s father-in-law, Captain Ronald Pratt, published in Australian Sea Heritage magazine.

Unbeknown to Bill when a schoolboy in the 1950s, the ship he saw in the Brisbane River, Pilot Vessel John Oxley, was to enter his life again, in connection with his father-in-law’s service as a Pilot, and as one of Sydney Heritage Fleet’s historic vessels.

He also finds time for the retirement hobby of painting. Needless to say, ships figure in his output. 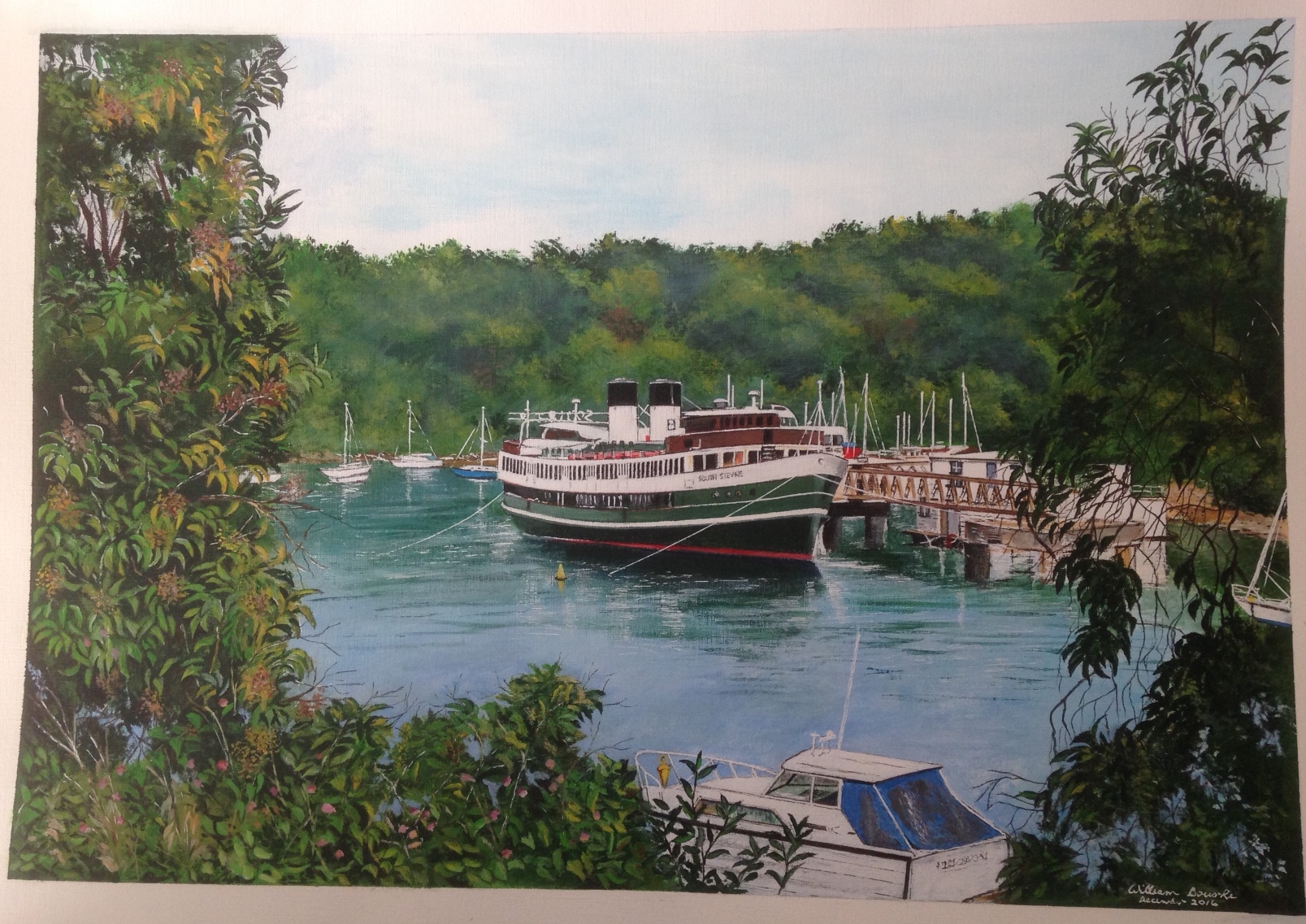 No matter the current pull of the sea for Bill, it was to the skies that he looked as the Qantas 747-400, Flight QF7474, departed Sydney and took with it an era of flying remembered with great affection by so many around the world.

This entry was posted on 16/08/2020 by ASHonline editors in Sydney Heritage Fleet.