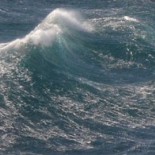 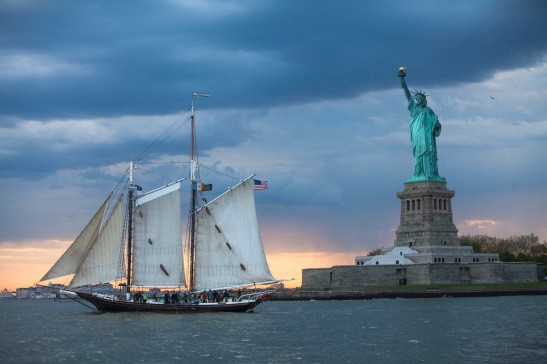 On a Sunday afternoon in June I was very happy to go sailing on New York Harbour on the 1885 schooner Pioneer owned by the South Street Seaport Museum. My husband and three of our New Yorker grandchildren came too – a wonderful thing to do.  The only disappointment was that we didn’t have much wind during the sail but our master, Kerry, looked after us admirably as we sailed from Pier 16 near the Brooklyn Bridge past Governors Island and past the Statue of Liberty with great views of Lower Manhattan and of other ships and ferries on the harbour. 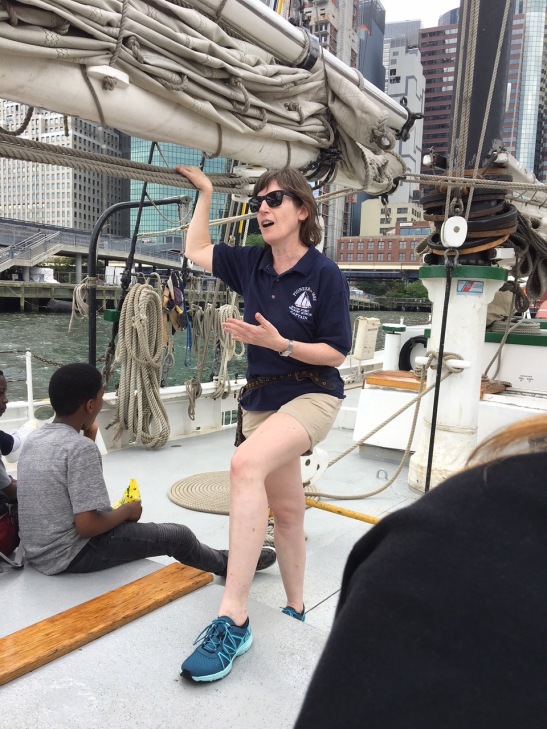 Our comments on the lack of wind actually led to an interesting question from the 13 year old grandson who asked why we were disappointed in the lack of wind.   This prompted a discussion on why wind was important for sailing vessels and the changes in the sources of power for ships over the years – wind, steam and diesel/oil power.

Pioneer was built in 1885 in Marcus Hook, Pennsylvania as a sloop to carry sand mined near the mouth of Delaware Bay to an iron foundry in Chester, Pennsylvania.

She was the first of only two cargo sloops built of wrought iron in the United States and is the only iron-hulled American-built merchant sailing vessel still in existence. In 1895 she was re-rigged as a schooner for easier handling.  At the time she was built, small coastal schooners were the delivery trucks of their era carrying various cargoes between coastal communities and almost all were made of wood.

In 1930 new owners moved Pioneer from the Delaware River to Massachusetts and fitted her with an engine, and no longer used her as a sailing vessel.  In 1966 she was sold again, this time to a Mr. Russell Grinnell, Jr. of Gloucester, Massachusetts for use in his dock building business.  He restored her schooner rig and rebuilt her hull in steel plating leaving the wrought iron frames intact.  Grinnell died in 1970 having bequeathed Pioneer to the South Street Seaport Museum in Lower Manhattan. 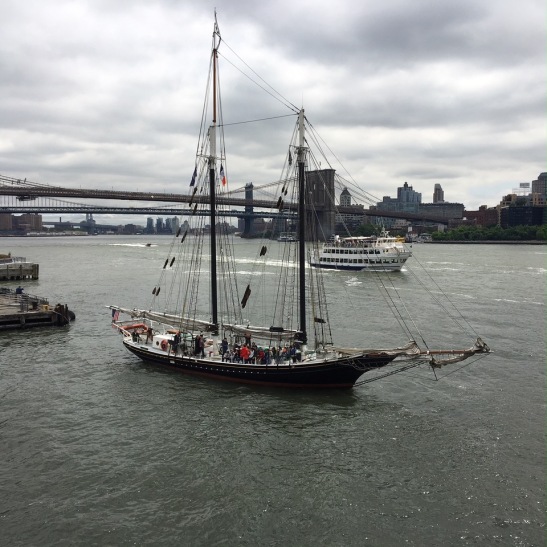 Nowadays Pioneer is used by the Museum as a sail training vessel, teaching volunteers traditional maritime skills and the art of tall ship sailing. She also offers visitors 2 hour sailings on New York Harbour during the season from May through to October, plus family ecology sailings which include dragging a trawl net to explore the wildlife of the harbour.  School sailings during the week are customised to the curricular requirements of the group.  She is also available for charters.   We were on a 2 hour sailing trip with tickets priced from $USD28 for seniors and children under 12 to $USD32 for adults.  Most public sailings are in the weekends in the summer season.

As a guide with the Sydney Heritage Fleet, I was particularly interested to compare Pioneer with our 1874 barque the James Craig built just 11 years earlier in Sunderland in northern England with a wrought iron hull.  Both ships have essentially retained their wrought iron frames but during restoration both have used steel plates although James Craig was able to retain about one third of its 424 plates, essentially those below the waterline.

The most obvious difference is the size and rigging of the two vessels. Pioneer is much smaller with an overall length of 31 metres (James Craig is 71.3 metres from jibboom to mizzen boom and 51 metres at the waterline).  Pioneer has a beam of 6.4 metres (James Craig 9.5 metres) and a mast height of 23.3 metres (James Craig is 35.7 metres above the waterline).  Pioneer is a two masted schooner while James Craig is a three masted barque and of course the rigging and number of sails are quite different.  With 21 sails on James Craig the ship needs a much larger complement of volunteers to take her out to sea for a day sail (up to 40 crew these days though when she sailed around the world as the cargo ship Clan Macleod the crew numbers were about 17 or even lower).

Malcolm Martin, Fleet Captain of Pioneer advises that the number of sails she can set are regulated by the United States Coast Guard (USCG).  The photos show her with four sails but while sailing with passengers she can also carry a topsail, set above the mains’l on the main topmast.  However, says Malcolm, when we are sailing for “our own amusement” we can also set a “fisherman staysail” from the main topmast to the foremast, above the foresail.  This sail is fairly large and set high, and without “mechanical advantage” it takes up a lot of deck space and requires a fairly large crew to handle safely, hence its disallowance by the USCG while carrying passengers. 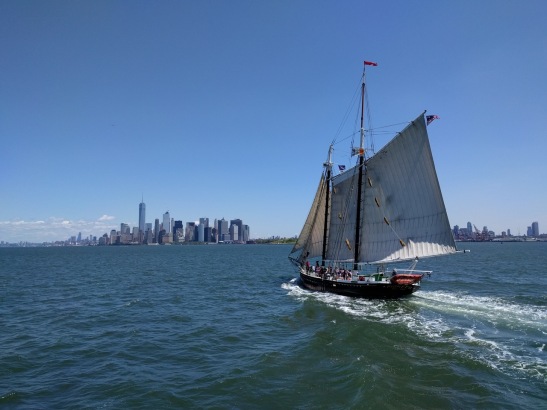 With regard to the number of crew on Pioneer, Malcolm advises that the minimum legal crew is 4 but typically they sail with 5 to 8 crew, 3 of whom are paid and the rest are volunteer trainees.  There are roughly 100 active volunteers in the pool with the training program being nearly 50 years old.  The program is highly structured and won the Tall Ships America (formerly ASTA) Sail Training Program of the Year award in 2012.  As Malcolm notes, literally thousands of people have learned to sail a 19th century coasting schooner aboard Pioneer.  Also he told us that Kerry, the master for our sail on New York Harbour, worked her way up to relief captain from greenhorn.

How to sail Pioneer

If you are in New York in the summer season, a sailing trip on New York Harbour aboard Pioneer is highly recommended. Head on down to Lower Manhattan but it is advisable to book online first at https://web.ovationtix.com/trs/cal/34598/1525147200000 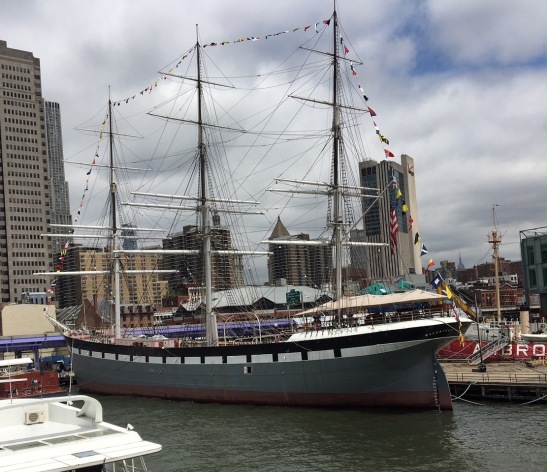 WAVERTREE and a glimpse of AMBROSE at South Street Seaport (Photograph: Jan Larsen)

All during the year you can also visit South Street Seaport Museum at 12 Fulton Street but check their opening days and times first at https://southstreetseaportmuseum.org.  And similarly you can do a tour over their 1885 tall ship Wavertree (unfortunately she no longer sails) and the lightship Ambrose both alongside at Pier 16 where you will also see Pioneer unless she is out sailing.

This entry was posted on 15/09/2018 by ASHonline editors in Sydney Heritage Fleet.